When a jubilant Frankie Dettori and his mount Stradivarius were saluted by a 70,000 crowd at Royal Ascot a year ago, life was very different.

On Tuesday, there will be no Queen, Royal procession or much of the glitz and glamour so associated with one of Britain’s most famous sporting occasions, but there will be elite sport and plenty of it.

An expanded programme sees six additional races for a total of 36 contests over five days.

Still Royal – but no procession

For the first time in her 68-year reign, the Queen will not be present at her favourite meeting.

While the fixture retains its regal title and branding, it is out with the top hats and in with the temperature checks as numbers at the meeting are restricted to the hundreds.

“The attention of the world is on the biggest sporting event globally to take place since sport resumed,” says Ascot director of racing Nick Smith.

“That is a heavy responsibility for us but it is a statement that racing is back. We must put on the best show we can.”

The fixture will retain an international feel – horses can travel from the United States, France and the Republic of Ireland even if there are restrictions keeping their trainers away.

Television coverage is on ITV and Sky, with pictures broadcast in 120 countries, including the United States, Australia and India, and countries in the Middle East and the Caribbean.

Like other racehorse owners, the Queen is expected to follow from home – in her case down the road at Windsor Castle.

Owners will be able to follow horses in the parade ring with a live 360-degree camera feed, while some trainers and jockeys are expected to give post-race debriefs by Facetime video calls.

Punters are being urged to wear a hat and dress up at home as part of the racecourse’s #StyledWithThanks initiative which will benefit four frontline charities. 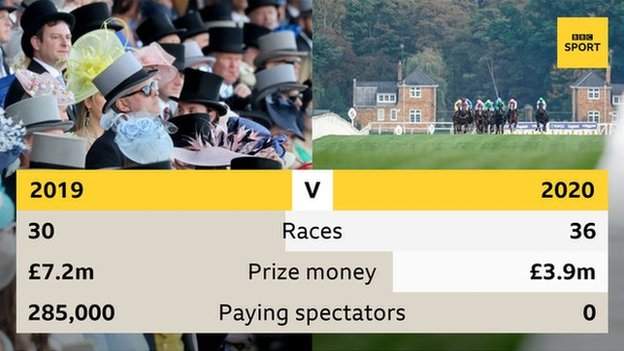 “It’s going to be strange behind closed doors but will still be a great meeting with high-quality racing,” says jockey Jim Crowley.

He is back to one meal a day after the “novelty” of three daily during the 76-day suspension of racing before the sport returned on 1 June.

“I put on about half a stone – it was lovely being able to have a fry-up in the morning,” adds Crowley, whose racing weight is 8st 10lb.

The 2016 champion jockey, who grew up just a furlong or two from Ascot, admits it has been strange adhering to the new safety protocols.

“It’s different wearing masks in a race, and sometimes your goggles steam up. You can’t have showers which can be a bit uncomfortable if you’ve had six or seven rides, but it’s good to be back,” he tells BBC Sport.

The lack of a big crowd could suit his mount, Battaash, odds-on favourite for Tuesday’s King’s Stand Stakes, one of eight top-level Group One races at the meeting which are part of the British Champions Series.

“I think it will be a positive as it should help him in the preliminaries. The first year he ran at York, he was close to the crowd and he boiled over,” said Crowley.

A quieter atmosphere could help the horse settle, and Blue Point – who beat him into second twice at Royal Ascot – is not around this time.

“When Battaash does win, it’s explosive. He’s put in some monster performances. If he’s on his A game, nothing can beat him, ” said Crowley. 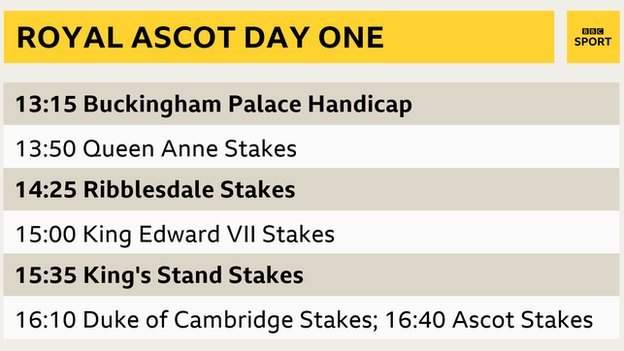 With Product You Purchase

Coronavirus: The first thing I bought when the shops reopened

‘It’s not talked about’: Female artists speak out about racism

Go to the Arqam options page to set your social accounts.

Weather
You need to set the Weather API Key in the theme options page > Integrations.